What about the performance?

The tests are performed with FDDB dataset (http://vis-www.cs.umass.edu/fddb/)

I mainly compared this implementation with the state of the art frontal face detector implementations and the BBF implementation as is. scdfmt.rb script is provided to convert rectangle format from BBF or SCD to ellipse format which seems provide a better result on FDDB dataset.

Use the following command to convert the file list from FDDB with .jpg suffix:

The following command will generate outputs that evaluation script understands:

After all 10 folds completed, run:

Please make sure the evaluation mode is ellipse format.

The following graph will likely to be generated: 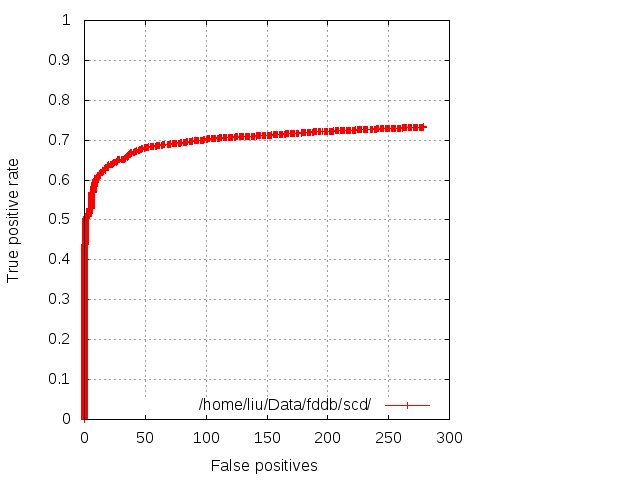 The threshold is tuned to generate about 200~300 false positives.

The BBF implementation can be evaluated too: 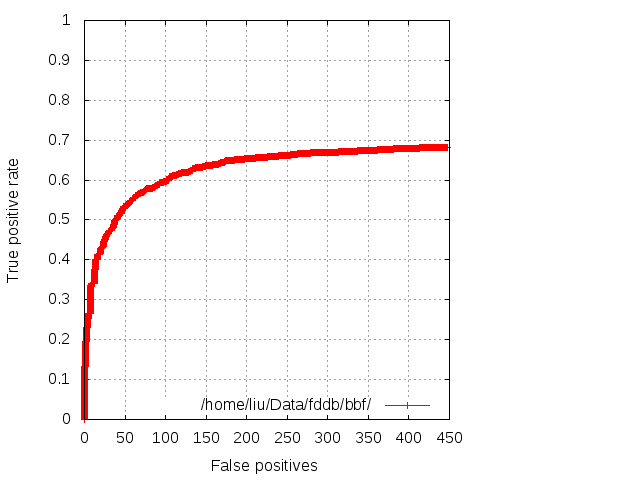 What about the speed?

One reason why BBF implementation, despite its rather unimpressive accuracy, still provided in ccv is its speed. At the longest time, BBF implementation or more accurately, its derivative is the only one that can run semi-real time on modern JavaScript engines. Although there is no plan to port SCD implemenation to JavaScript, its native code performance is only twice as slow as BBF (OpenCV is about 3 times slower than BBF with single thread setup), thus, showing promising sign will eventually be on par or faster, and finally replace BBF implementation. This performance requires to run ./scddetect with default parameters (the parameters for FDDB run from 24x24 size, whereas the default parameters run from 48x48 size), and operating with grayscale images (load image with CCV_IO_GRAY | CCV_IO_ANY_FILE parameter). 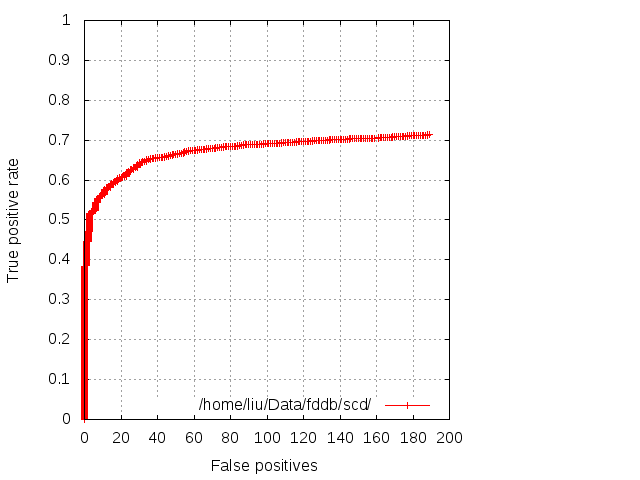 How to train my own detector?

The vision community in the past a few years has generated plenty of open dataset, therefore, it is now possible to train a reasonable face detector (as shown by HeadHunter) with open dataset.

This face detector is trained on AFLW dataset: http://lrs.icg.tugraz.at/research/aflw/

A script ./aflw is provided to generate positive images from AFLW annotated original photos. But first, we need to generate a list of photos => faces rectangles.

It will take a while to complete, but once it is done, you will see 16444 images in the output directory, both in grayscale and color.

Using find command to create both list of negative images for hard mining, and the list of positives:

It takes me about half day to finish training to 6-th classifier, and this is the depth used in ./samples/face.sqlite3.